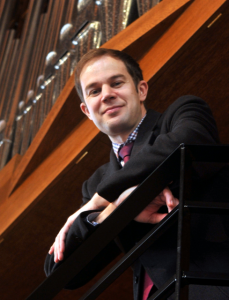 Simon Bell was appointed Musical Director of Stroud Choral Society in March 2020.  Prior to this, he was the choir’s accompanist, and often performed at concerts, demonstrating his considerable skills as an organist.

In spite of the obvious challenges of taking on and directing a choir during a pandemic, with the help of Zoom rehearsals, Simon nonetheless successfully enabled us to produce some on-line performances, which can be viewed on our YouTube channel.

Since September 2021, the choir has once more been meeting in person.

Simon is also Director of Choral Music and Organist at Dean Close School in Cheltenham, a role he has held since September 2012.  In this capacity, he directs the boys and men of Tewkesbury Abbey Schola Cantorum in the abbey’s weekday services.  His post at Dean Close also includes responsibility for all the choirs in the senior school.

Simon is a graduate of Leeds University and the Royal College of Music where he studied for a post graduate degree in Organ Performance.  He maintains a busy schedule of solo organ recitals and has made three solo recordings to date.

Simon was also accompanist to the Waynflete Singers in Winchester and taught the organ at both Southampton University and Winchester College.